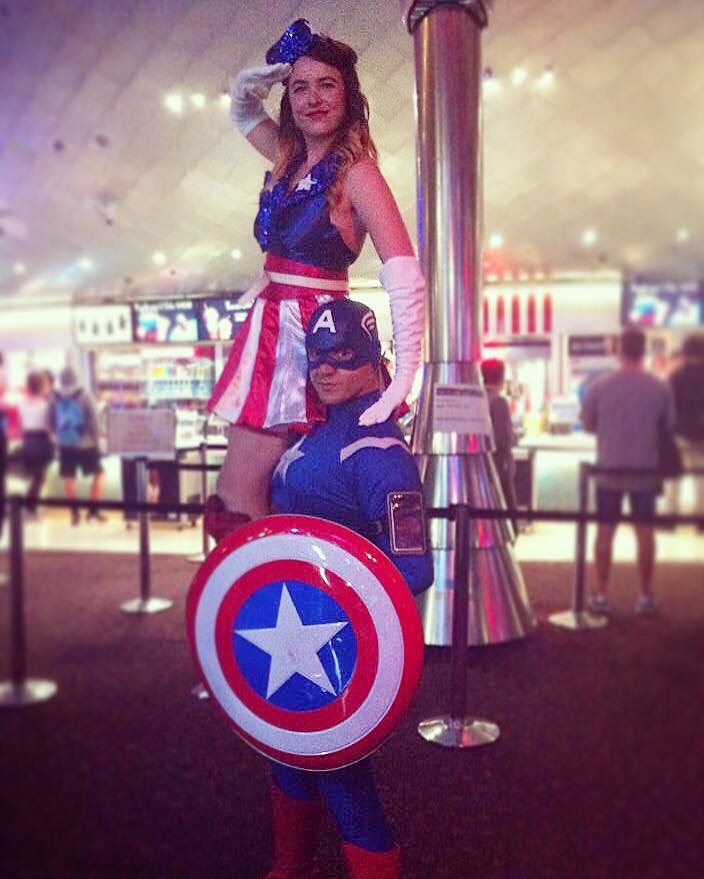 Made for : Midnight premier of The Avengers: Age of Ultron

Background : I’ve never really been a fan of the Marvel costumes. I find them all rather samey and I’m just not in to the mesh bodysuits in different colours. However, I adored this little song and dance number these girls had with Captain America. I was very much in to the vintage aesthetic at the time and wanted a cool Marvel costume like everyone else.

I want to preface by saying every part of this costume apart from the top was made using the pattern drafted by Kathy KayDee. She has shared a free pattern and a wealth of knowledge in her group on Facebook – Captain America Dancing Girls – Costume Construction Group.

Hat : This was my first time working with buckram and doing millinery in any sort of way. The entire hat was hand stitched together. I had a base of buckram with millinery wire to give strength an support. The hat was covered in blue sequin fabric and a white star was cut from felt and hand-sewn in to place on the side. To wear it in my hair, I slipped bobby pins in past the wire in the base of the hat because I never lined it.

Top : I made the halter part of the top from blue satin using Butterick 5209 even though the seams are all in accurate (they should have been princess seams). I never got the fit right and it was weirdly baggy but I also had no idea how to fix that at the time.

The collar was a separate piece that pinned in place on top of the halter. It was all hand sewn as my machine couldn’t sew through the sequins. I then placed two white felt stars on either of the lapels. I made them from white felt as I couldn’t find patches anywhere.

Skirt : Made from red and white satin using the Kathy KayDee pattern. The waist was elasticated which made it super comfortable.

I made the petticoat as per the pattern, it’s basically just a a bunch of tiered rectangles in different sizes. I used a crystal organza because I couldn’t find a plain organza anywhere. The hem of the petticoat was trimmed in red bias tape. It also had an elasticated waist band.

Accessories : The shoes, belt, stockings and gloves were burrowed from the costume hire store that I was currently working at. I was so lucky that they happened to have the screen accurate shoes.

The cummerbund was made from the Kathy KayDee pattern from red satin with a stiff interfacing. I never put a closure in the back so I used a safety pin on the day.

Progress Photos
Related Costumes
Shop
Back to all Costumes

Currently working on :
Durmstrang Uniform - Harry Potter and the Goblet of Fire